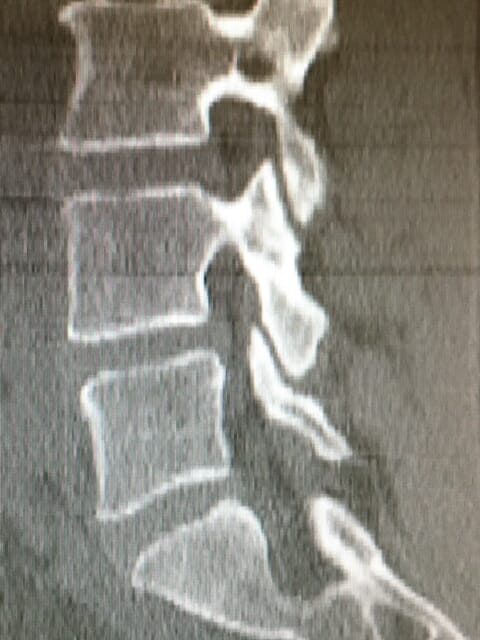 Two years ago (at age 46), I began to experience symptoms of sciatica in my left hip, leg, and ankle. I had never experienced any issues with my lower back before and pride myself with having a pretty high tolerance for pain/discomfort. But for the life of me, I could not figure out what was causing this strange pain/numbness/weakness that went from my left butt cheek all the way down my leg. All I knew was that it negatively affected my ability to pole dance and that was NO BUENO! After several weeks of physical therapy and worsening symptoms…BOOM…my L4/L5 disc herniated. Suddenly, I was on hiatus from pole classes and sitting at a consultation with a spine surgeon. Fast forward to about 8 weeks post-op when I was cleared by the doc to resume exercising. It didn’t take long to notice that I had lost flexibility and strength, but the muscle memory was (thankfully) still there.

Granted, I never had the degree of flexibility that I always dreamed of, but I was working on my front splits and making progress. However, after months of not being able to dance or do anything other than walk dogs, my hamstrings were tighter than a pair of 1980’s Jordache jeans! But, it was time to get back on the pole…

My first attempt at exercise was a “gentle yoga” class. When my hands were nowhere near the floor while doing “forward fold”, the harsh reality set in: I have quite a ways to go before I see another invert…So, I opted for FlyGym classes as a way to rehab my back and leg. It felt so good to just be able to enjoy movement and stretching again (and without pain!). As frustrating as it was to take things nice and slow, I did just that. After my muscles began to remember what it felt like to move around, heat up, and stretch effectively, I was ready to get back to the pole…(barefoot, anyway). I found myself taking Level 1/Beginner classes and experienced the deja-vu of being a newbie poler. Eventually it was time to get back to pole tricks, so I signed up for beginner tricks and hoped that the muscle memory would kick in full-gear. I had forgotten how much hard work the beginner classes were! Lots of drills and slower dancing meant that my muscles were put through the paces! Feeling that familiar soreness (the good kind) the day after a beginner pole class was the best feeling in the world!

As a result of my back injury, I lost a great deal of strength, not only in my upper body but in my core as well. It became obvious to me that I was going to need to do planks…A LOT of freaking planks!! Thinking back, I probably took things a bit more slowly than I needed to, but I typically prefer to err on the side of caution. (I also didn’t want to risk messing up the amazing work of my brilliant surgeon.) One good thing that came out of all this rehabbing was that I became much more focused on building my core strength than I was before. Once I was able to get back to my intermediate trick level classes, I noticed that my inverts were actually smoother and more controlled than they were prior to my back injury. Plus, I was reminded to ALWAYS listen to my body.

In all honesty, the toughest part of getting back to the level I was prior to my injury was having the patience to start almost at “square one” as I reminded my body of what it used to do rather easily. Some days I felt as if I had been “left behind” as my fellow students were learning new, more advanced tricks and I was struggling to get back my shoulder mount that had gone MIA. I practically had to re-learn how to walk in 7-inch Pleasers again. As time went by, I regained my strength, flexibility, and stamina. “Baby steps” were the key for me, but bear in mind that everyone’s body heals differently. Patience is valuable commodity and it is beyond important to listen to your body (and your physician!). I didn’t know how long it would take to get back to the level I was when I had to stop poling, but 18 months later, I think I have surpassed it and am thankful every day that the surgery was a success.

Fortunately, I’ve never experienced a serious pole-related injury beyond a few bruises (a.k.a. pole kisses) and a pulled pectoral muscle (thanks a lot, Brass Monkey!) No doubt, an injury sustained while poling can create some fears, doubts, and anxiety when getting back up on the horse (or pole, as it were). I know one pole instructor personally who sustained an injury while executing a pole trick combo and I have a deep respect and admiration for how she kept up with exercising (physician-approved of course) until she was fully healed and approved to return to pole fitness. Her documented progress on social media was an inspiration to overcoming setbacks and keeping your eye on the prize!

*Side note: I have been following (via social media) the recovery journey of Jason Lam, the Las Vegas aerialist who fell 14 feet while training on the aerial straps. He suffered a life-altering spinal cord injury and his tireless determination to recover from the paralysis is nothing short of super-human! If you want to truly be inspired, follow him on IG and read the interview he did with Bad Kitty.

Christy
Christy has been a pole dance student for 6 years in the Tampa/St. Pete area. She is a retired State investigator and now part-time pet sitter who is hoping to become a pole instructor someday. She has no dance background, however, she was a Flaggerette in her high school marching band. Christy has performed with Impulse Pole Dance at the last five “Pole for a Purpose” events in Tampa and is now a pole instructor at Brandi Land Pole Dance & Aerial Studio Boutique in Tampa, FL!
Latest posts by Christy (see all)
babystepsback surgerychronic injuryhow to come back to pole after injuryinjury preventionlisten to your bodyovertraining can lead to injuryspinal injury