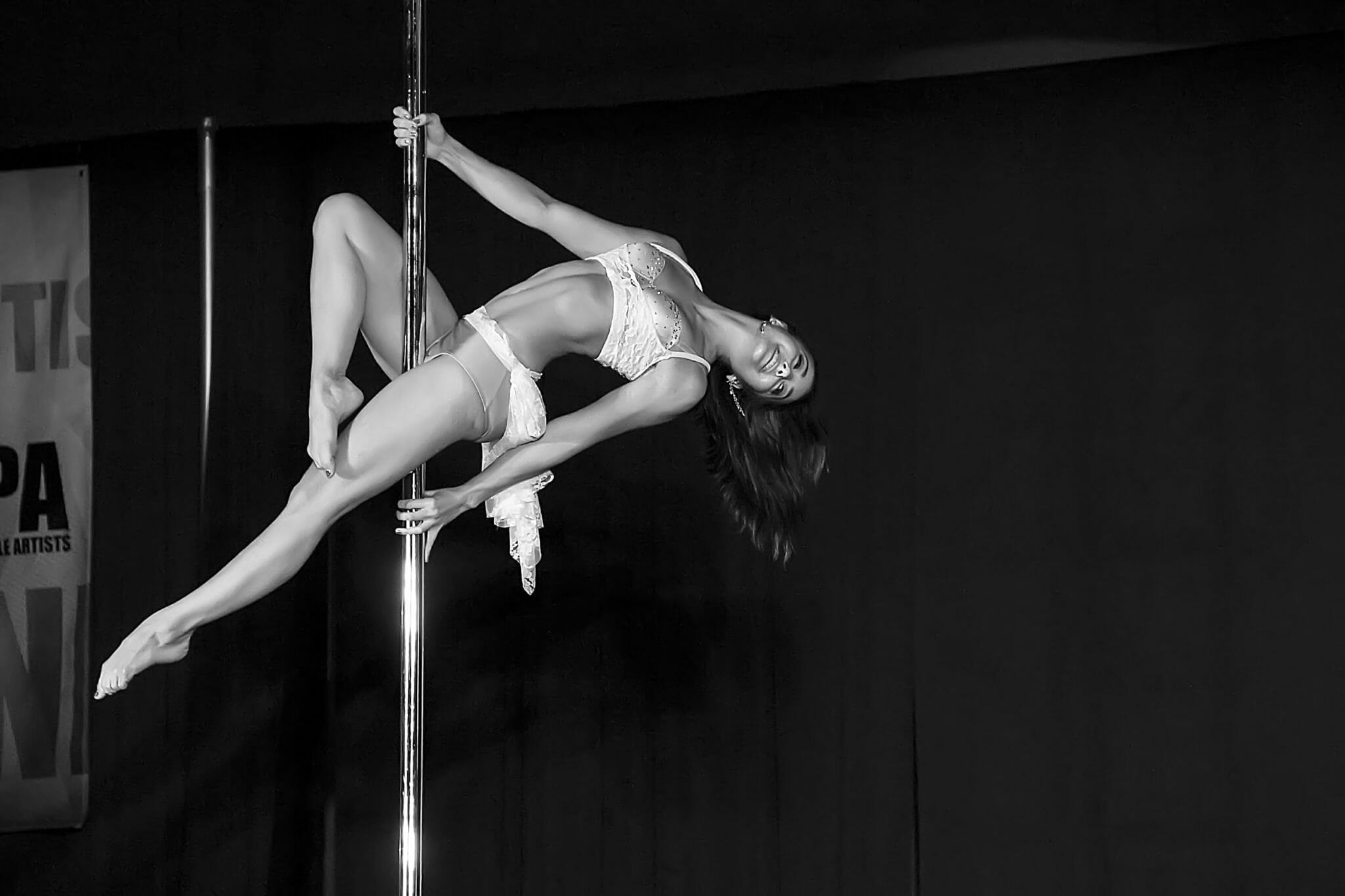 “I have always been somewhat of a high-strung person.  I get bored very easily and therefore need lots of things happening in my life to keep me from getting anxious.  I am a Gemini, and can move very easily and quickly from one project to the next.  I am a performer and I love creating costumes, planning productions, collaborating with my fellow artists, and just being creative in general.  However, exercise was not always a well-thought-out, important part of my life.

As I grew into more of a pole dancer, I wasn’t really aware how much of a psychological release was involved in movement and activity.  It wasn’t until I was still for too long, or bored, or lazy, that I realized that there is a true connection between peace in the mind and release in the body.  Like many contemporary women, I struggle a bit with anxiety and depression.  It hits me the hardest in the mornings, either just before I become aware that I am awake, or just after my alarm goes off.  It attacks immediately.  All of the seemingly impossible responsibilities that hover over me as I lie in bed, trying mentally to prepare for my day.
It seems like a normal feeling, but recognizing it in yourself is an incredibly difficult thing.

I had been working more in the office and doing less instruction in the classroom.  I wasn’t planning any productions or performances.  I was getting poor sleep and wondered what was wrong with me?  I realized that there were days that I felt good and days that I felt bad.  And there was nothing different in my life otherwise… My life was good!  It wasn’t perfect, but still I had the same problems, the same worries that I experienced everyday in life…Nothing to justify the sense of panic, the unsettled feeling that I woke with.

Finally something became apparent.  Moving my body was an essential part of my mental health.  I realized that I felt much better on days that I taught classes early in the morning, or on the mornings after I had taught several classes the night before.  I was never the type of person who needed practice maintaining a healthy mental approach on life.  Anxiety was fairly new to me.  I had always considered myself very much in control mentally.  The physical exertion and release of energy that happened when I would dance, got rid of whatever happened inside my brain that caused anxiety to creep in.

And it’s not just dance.  It’s also about a good old fashioned sweat.  Whether it’s an intense dance class, a nice long walk in the sunshine, a relaxing steam-sauna, or a spicy Thai meal… Sweating equals detoxification.  Mix that with the unleashing of physical energy combined with the artistic expression of dance, and you have yourself a cure for mild depression and anxiety.  Not to mention you will have better physical health of course, with clearer skin and more energy.

My love of pole and aerial dance stretches back 14 years now, and I recently discovered something that has helped grow my love for movement and sweating even more.  I recently discovered BUTI Yoga.  BUTI, a combination of power-yoga, plyometrics and tribal dance, has helped me to push my body in healthy ways.  It has grown my stamina, helped me gain more strength and awareness in my body, and it’s a fantastic way to release negative energy and blow anxiety out of the water.

The truth is clear!  Moving your body and sweating are sure-fire ways to combat anxiety.  Even though sometimes the negative thoughts and worried feeling still try to creep into my brain and the rest of my body, I am now aware when it is happening and how to make it go away.  As I said earlier, recognizing it in yourself is the hardest part, but you can certainly do something about it.  Now… GO DANCE!”

From Tomboy to Sexy Pole Star: Nicole the Pole

Why go to PoleCon? The Business Edition

PoleCon historically has been a great place to learn a new pole trick, connect with…

The role of the trainer is crucial! If you start poledancing with a bad trainer,…

Stretch it out at #polecon