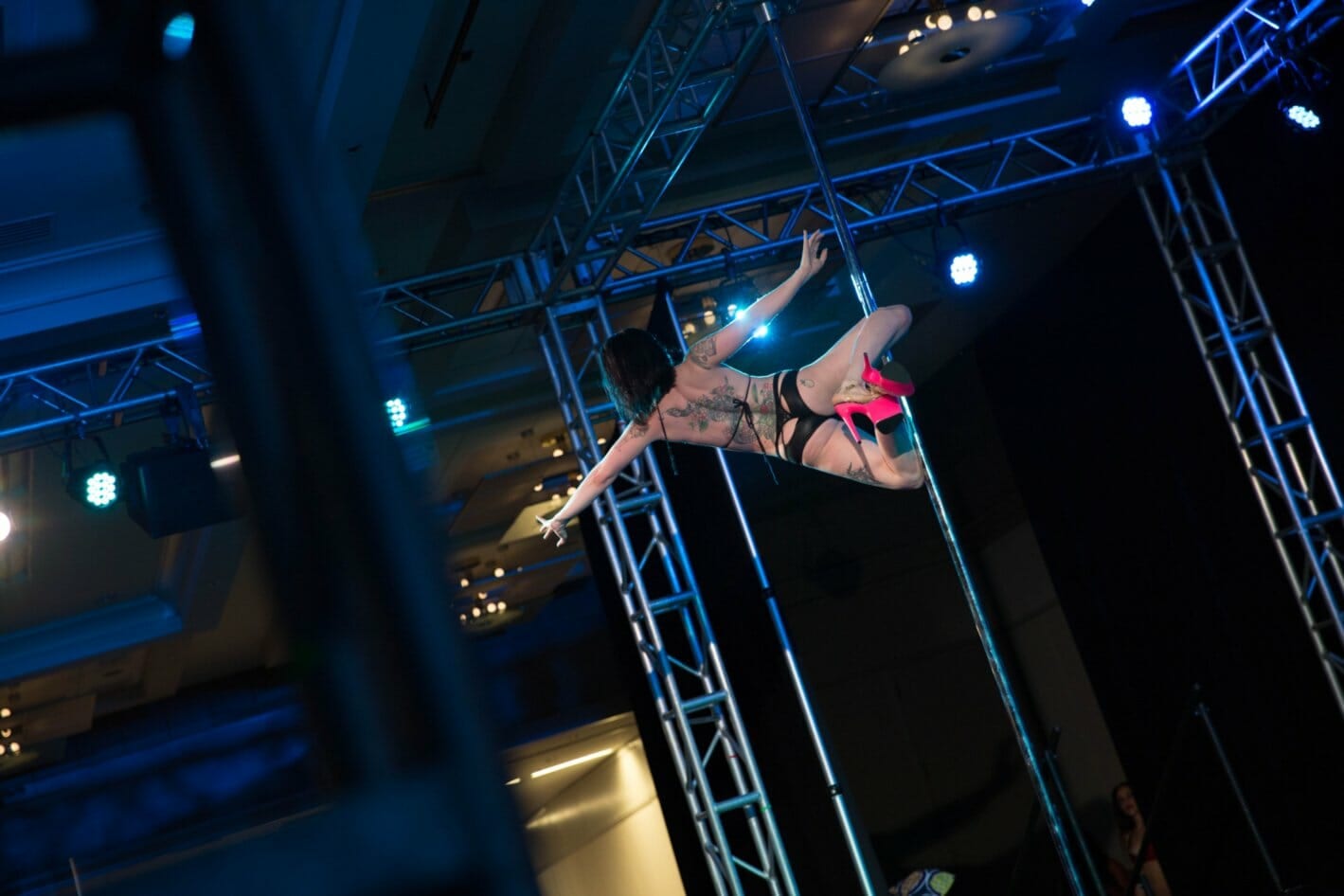 My personal pole journey began a little over seven years ago. At that time, it seemed that it was nowhere near as popular as it is now. Not too many people had heard about it. When people would ask what my hobbies were, I’d simply say ‘dancing.’ When folks would drill down as to what type of dance I’d say, ‘all kinds,’ because, well, pole dancing does incorporate all styles. When telling someone I was dating or a new friend about my hobby, I’d often be confronted with questions like, ‘where do you work?’ or ‘oh, so you’re a stripper?’ These types of questions infuriated me. I’d constantly be like, ‘no dammit! I’m not a stripper I just enjoy working out and having fun while doing it! I’m learning amazing new things, conquering my fear of heights and building muscles!’ I couldn’t understand why people took such offense to something I was enjoying.

My new hobby was not so well-received by friends and family –at least not at first. Some friends, mostly men, would make snide comments whenever I’d post a picture or video on social media. I didn’t want to hear about how sexy I looked or see another ‘hott damn’ comment. Some guys even went the opposite direction telling me they were tired of seeing half-naked pictures of me. That really hurt because I was just trying to show off an accomplishment. Why the hell is a picture of me doing a gemini so offensive to you?!

My parents were initially not super thrilled either. I kept having to reassure them that I wasn’t going to become a stripper and that I was doing it solely for fitness purposes. Eventually my mother came around when I started inviting her to my competitions. She actually came and supported me. When I started on my journey of teaching she was even more supportive.

But the journey of pole dance acceptance by those not in the community is not an easy one. Most of us know that there is still the association of pole dancing with stripping and a lot of us try to distance ourselves from those who are strippers. And trust me, I was one of them. For years. But then, I started meeting strippers. First it was just a couple, but then I started meeting dozens of them via Facebook and various pole conventions I’d attend. And I started realizing that they were people just like me. They had families, loved pole dancing, were also pole instructors, and lived normal lives. My initial thoughts about them washed away over the past few years. Why I thought they were all sleazy people and fed into the stereotypes that I’d grown to hear as a kid suddenly didn’t seem important anymore. I just saw myself making friends.

Still, when I was asked to portray a stripper on the pilot episode of Star, I was so taken aback by the guys they’d hired as background for that scene. They asked where we worked, if they could smack our asses and one guy even told my friend Margot that she’d given him a hard-on. I was horrified. I was like, ‘man, if this is what working at a club is like, why would people subject themselves to it?’

Fast forward to present day but rewind some. Basically since I started pole dancing, I’ve had those few friends who suggested that I consider stripping. Some of you probably have as well. They’re like, ‘OMG you’re so flexible and such a good dancer, you should really consider doing this professionally.’ Professionally to me meant competing, performing, teaching, being in music videos, etc. And I did just that. And still do. I’ve been fortunate enough to compete and perform throughout the South and appear in several music videos and TV shows. I even played a stripper in my latest film.

Then I met my friend Sarah who really pushed me into stripping. Mostly because she wanted to do it too, even though she has never used a pole in her life. So we went and auditioned at one club and got turned down. And I don’t handle rejection well so I made it my mission to find a club to work at and I did. I was initially bummed the first place didn’t work out because I had a friend who worked there, but I’m super happy with where I ended up.

For those of you who do know me, this gear change may come as a surprise. A lot of people see me as a clean-cut, educated, and well-behaved person. But those who know me really well know this is far from true. I’ve always been kind of an exhibitionist and know that I love dancing and am a fairly outgoing person. And the money has also been pretty great.

It certainly was an adjustment and my first two days I barely made any money. By my third day, though, I started making hundreds and I was more confident. It is still hard to deal with rejection on a daily basis but the flipside is getting told by dozens of people how attractive you are. So I definitely have had to learn to take the good with the bad. Being that I just finished my third week at the time I’m writing this, I still feel like I have a lot to learn but like with my journey into pole dancing itself – everything takes time and practice.

I was really worried about being objectified, but honestly I feel empowered. I can turn people down, tell them what they can and cannot do when giving a dance or in VIP and telling a dude, ‘there’s no way in hell I’d have sex with you,’ feels pretty good sometimes. No, I don’t say that to people on a daily basis but more like one time when a dude wouldn’t take a hint. Obviously no job is 100 percent perfect all the time, but I’m really liking this one. There are, however, pros and cons as with any job.

Overall, however, I think that the pros definitely outweigh the cons in this situation. As many of you would agree, no job is ever perfect. But getting paid to dance on a regular basis, work on pole tricks (and always in heels!), getting free drinks and food is hard to complain about. Sometimes guys will pay me just to sit and talk with them. It also is forcing me to be a better dancer. Some of my co-workers are super flexible and bust out jade splits on a daily basis. I’m always afraid of falling on the pole because it’s pretty slippery most of the time so I’m always carrying around a bottle of spray with me!

I’m glad that I finally decided to take a leap of faith and listen to those friends who had been pestering me for the past few years to give stripping a try. I can’t predict I’ll like it as much as I do now in a year or so down the road but for now, I’m happy. And I can finally afford more pole lessons again! And cute pole clothes! So I’d say it’s a win-win.

How to Put on a Dope Performance on a Budget

Putting on a performance, especially one for a large crowd like PoleCon, is no easy…

Why choose to Pole Dance?

Millions of people are getting obsessed with this interesting and unusual kind of sport—pole dance.…

Scene: After a recent showcase. STUDENT: That was so amazing! Everyone did such a great…